While Ridley Scott’s Alien will always be my favorite, Aliens fights valiantly with Prometheus for the close Number 2 spot. It’s a great reference piece for Cameron’s early output, in which unlikely heroes prevail against a sabotaged establishment and inhuman forces. Just what the doctor ordered for Ellen Ripley, the last survivor of the Nostromo.

Fifty-seven years after Ellen Ripley (Sigourney Weaver) survived her disastrous ordeal, her escape vessel is recovered after drifting across the galaxy as she slept in cryogenic stasis. Back on Earth, nobody believed her story about the “aliens” on the moon LV-426. But after all communication with a colony on LV-426 is lost, the Company enlists Ripley to aid a team of tough, rugged space marines on a rescue mission to the now partially terraformed moon to find out if there are aliens or survivors. As the mission unfolds, Ripley will be forced to come to grips with her worst nightmare, but even as she does, she finds that the worst is yet to come.

James Cameron certainly knew what he was doing by subtly shifting the focus more toward an action-oriented military sci-fi thriller, giving this sequel a unique voice compared to its predecessor. While Scott’s film presents several menaces, from the evil Company to the terrible Alien, it doesn’t seek to provide a viable alternative to these facts of future life. Alien was very much a ’70s film, with nothing cynicism toward government and society. Cameron’s Aliens is most certainly an ’80s film. It throws these rules out the window, and provides the answers that he thinks this new reality needs. It’s a faster-paced film of action compared to Scott’s slow-burning horror, and the switch actually works. 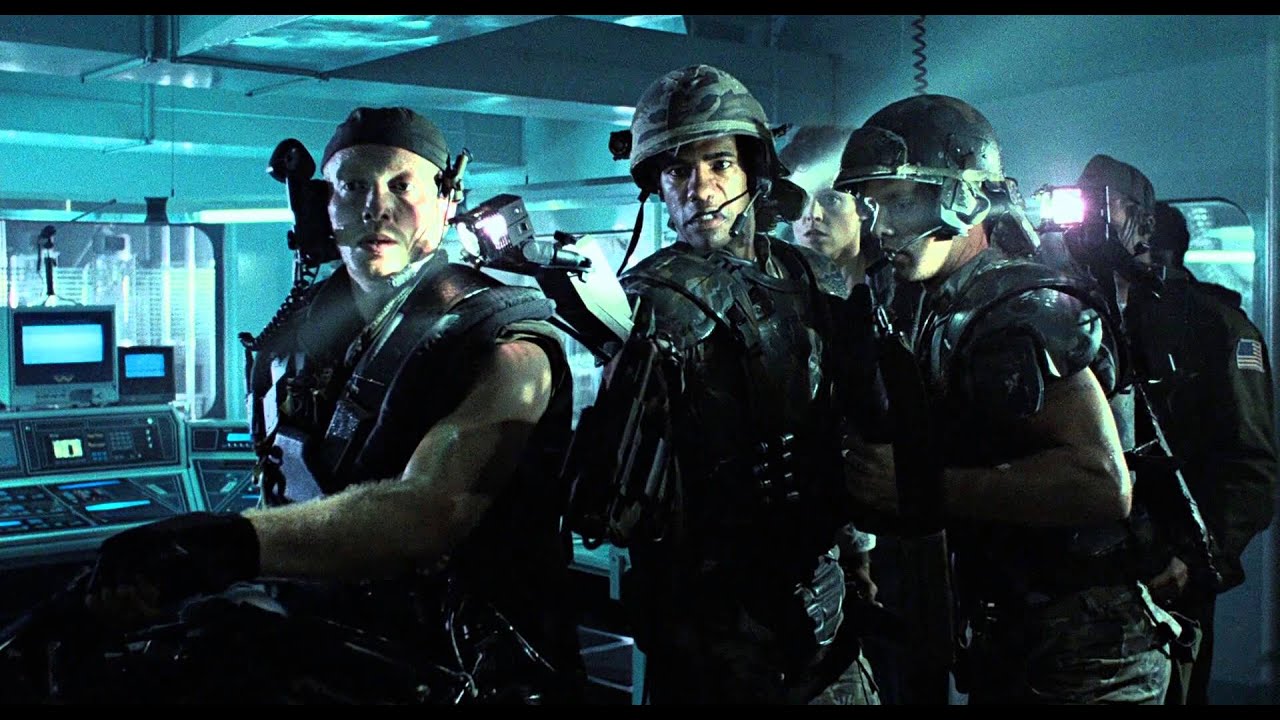 Picking up over half-a-century after the first film, Ripley finds a changed world. The Company still exists, however it seems to be more of a bureaucratic mess than a sinister syndicate. LV-426 is now a terraformed colony, which becomes the main setting of the story, and a combination of the two main environments of Alien. There, the stakes are raised considerably; instead of a solitary monster, there is an entire hive of the beasts, each and every one even more ferocious than the first, turning the colony and its inhabitants into a nasty simulation of the Derelict’s otherworldly walls. Whereas Scott delights in the shades of darkness and sterility that the Alien hides in, Cameron opens up the screen ratio from 2.35:1 to 1.85:1, and fills his blue-lit sets with fog, smoke, and dirty air wet with alien slime.

The Aliens are more than mindless beasts this time around, led by a royal caste of Cameron’s own conceptualizing: the Queen, the ultimate Anti-Mother and nemesis to Ripley. The Queen, portrayed by several miniatures and one full-size animatronic puppet, is an exceptionally-realized character, expertly shot to avoid giving away the trick and articulated with a mean personality that gives Ripley a definitive enemy to vanquish.

For fans of military hardware, Aliens will be a delightful romp for you. The militaristic designs, most of them conceived by Cameron, evoke vehicles and weapons in use during the Vietnam war, adding fuel to the fiery theory that Aliens is an allegorical reference to that conflict, and the visual effects portraying them won an Academy Award. In a way, Cameron gave us the version of Starship Troopers we should have had, and then threw in a mega-dose of extraterrestrial horror for flavor.

But this is Aliens, and it wouldn’t be so without Ripley. Sigourney Weaver is given a meatier serving of character development to work with, fully earning the moniker of the badass heroine that was shakily bestowed upon her last time around. Cameron adds a new dimension to our heroine, one to balance the Alien Queen: Ripley the Mother. In the colony, Ripley finds a sole survivor: Newt, a young girl played by Carrie Henn, traumatized by the attack but possessing a resourcefulness that Ripley recognizes. They end up forming a bond much like motherhood, rounding out the family-prevails thesis that Cameron plucks from common conservative thought of the 1980s.

The rest of the cast doesn’t slouch either, embodying the best of the genre, from Hicks’s cool, collected soldier, to Hudson’s macho-masked instability, to Bishop’s creepy, yet calming android. These excellent characters populate a world just as detailed and dark as the one Scott envisioned in the first film, proving that Cameron’s eye is just as sharp.

In 1992, the Aliens Special Edition was released to home video, adding seventeen minutes of footage to the theatrical cut. While the Special Edition’s pace is slightly weighed down by the additions, they greatly benefit the narrative, providing greater clarity to Ripley’s and Hick’s characters, and a glimpse of the colony and the Derelict before all hell breaks loose. I’m still not sure which I prefer, but if it helps at all, Cameron’s choice is the Special Edition.

Aliens is a film of high popularity. While Alien elevates the classic haunted house story to Lovecraft levels of existential and bodily horror, its outlook is bleak at times and as we all know, horror movies aren’t everyone’s thing. Aliens shifts the focus towards that of a conservative war story, offering clear answers to society’s problems whereas its predecessor presented no easy ways out. This is sure to alienate some of the franchise’s more cerebral fans (no pun intended), but if one has an open mind and a love for unconventional action, Aliens is a tour de force that isn’t to be missed.